Society Saturday - In the footsteps of Alice Paul

Because this is the 100th Anniversary of the Nineteenth Amendment giving women the right to vote, the National Society Daughters of Founders and Patriots is focusing on Women's Suffrage this term.

The National President's project is to support the Turning Point Suffragist Memorial which is being built on the site of the Occoquan workhouse in Fairfax County, Virginia.

Along with that theme, I was in south New Jersey recently and the New Jersey DFPA chapter president and I toured several sites that were significant to Suffragist Alice Paul.

Alice Paul was born in 1885 at Paulsdale, the family home in Mt. Laurel, NJ.  She grew up there prior to attending college at Swarthmore, University of Pennsylvania and England.

Because she grew up in a Quaker home, she believed in equality of the sexes.  While in England, she learned the more militant "Deeds Not Words" tactics of the British Suffragists.  Returning home, she

organized a national suffrage parade on March 3, 1913 – the day before Woodrow Wilson’s inauguration.    Wilson was on record as stating that women were unfit to vote because they had no understanding of politics and would let emotion rather than reason rule them. The parade was made up of over 8000 people who faced spectators who were grabbing them, throwing things, and yelling obscenities, thus ending with a mob action.

After the passage of nineteenth amendment, she continued to work for the National Women's Party and authored the original Equal Rights Amendment in 1923.

While touring Paulsdale (now the Alice Paul Institute) we toasted Alice for all of her efforts in obtaining the women's vote.

When she was in New Jersey, she worshiped at the Moorestown Friends Meeting.  We were welcomed there by a wonderful young woman who showed us around the meeting house which had been built in 1802. 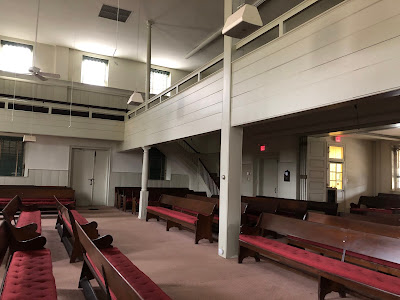 We also saw the building that had been the nursing home where Alice spent her final years.  And of course, we paid respects at her grave at the Westfield Friends Cemetery in Cinnaminson, NJ. 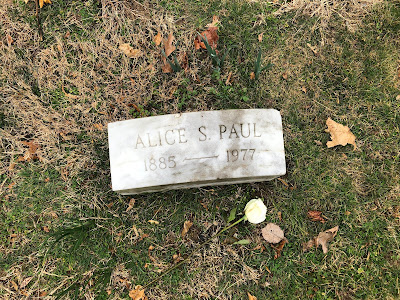