The DuPage Chapter of the Daughters of American Colonists had their December meeting at Stacy's Tavern in Glen Ellyn. 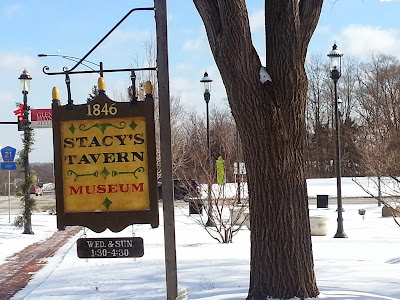 Stacy's Tavern was founded in 1846 by Moses Stacy who migrated to Illinois in 1835.  He purchased 500 acres of land with the intention of making money.  One of his ventures was a tavern along one of the main roads out of Chicago.  The tavern was a popular stop along the route.

There was a ladies' parlor where Joanna Stacy would entertain any women who stopped.  The men were entertained in the tap room where there were card games and checkers.  They might drink some of the home-brewed beer made with hops grown by Mr. Stacy.  Local men would also stop by for the evening, especially if they were single because they would receive a good hot meal.

After dinner, everyone would retire early, so they could get an early start to resume their travels in the morning.  Men would sleep in one room, women in the other, with up to 5 people, often strangers, in one bed.   Two meals, a bed for the night, and hay for the horses cost 50 cents. 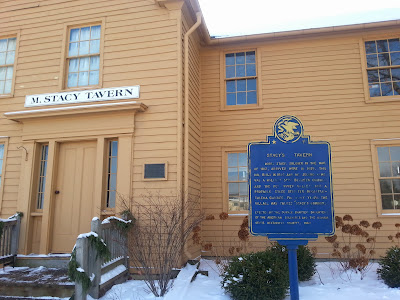 Stacy's tavern is on the National Register of Historic Places.  A historical marker was placed by the DuPage DAC in 1967, and we visited it as well. Unfortunately, photographs were not allowed inside, so I only have exterior photos.