Kay Shelton, a speaker with the Illinois Humanities Council spoke to our Branch of Sons and Daughters of the Pilgrims about the Lincoln Highway.

The Lincoln Highway was the brainchild of Carl Fisher (also the founder of the Indy 500 race).  He envisioned a highway from New York City to San Francisco and called it the Coast to Coast Rock Highway.  His idea didn't take off until 1913 when Henry Joy changed the name to Lincoln Highway.

This "highway" essentially connected existing roads, which were largely dirt.  Henry Ford was approached to invest, however he wasn't interested because the Model T could travel in mud while some of its competitors couldn't.

Over time, the roads were improved, sharp turns were straighened and some sections were rerouted.
Along the way, several attractions popped up, along with businesses that catered to travelers.  Miss Shelton showed examples of some attractions in Illinois. 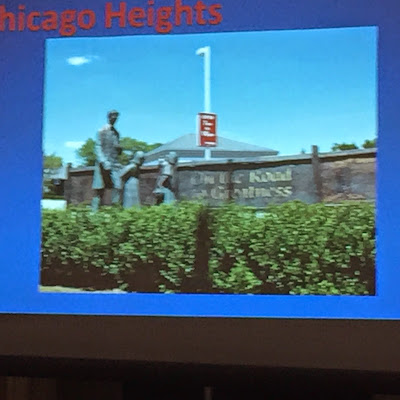 The Lincoln Highway can still be travelled today and can be identified by the red white and blue signs marking the route.

I wasn't able to attend all of my DAR State Conference, but I did see three interesting programs at the allied meetings during the 24 hours that I was there. 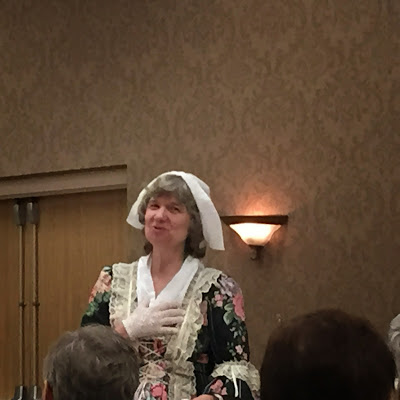 That evening, the State Officers Club hosted the Tea Ladies.  They are two ladies who give programs focused on Victorian times and customs.  This program was all about hats from the Victorian period until World War II. 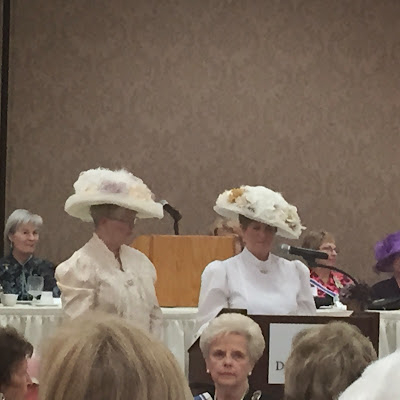 They brought a huge selection of period hats and recruited 2 ladies from the audience to model them. 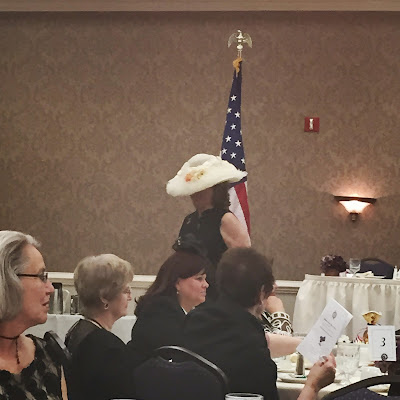 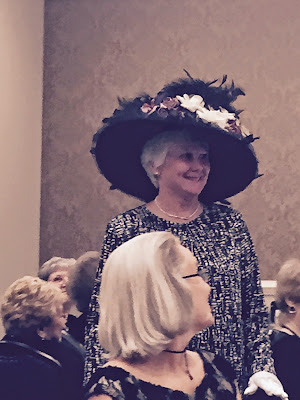 Finally, the next morning, our breakfast program was given by Dr. Claiborn Skinner.  He is a History Professor at the Illinois Math and Science Academy.  He talked about the importance of Illinois in the Colonial Wars and how it helped shape the future of our country.  He was also recognized as the State and National Recipient of the Outstanding Teacher of American History by the Daughters of Colonial Wars. 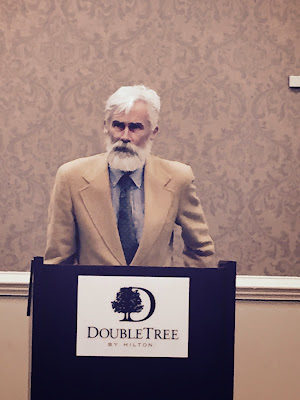 Adam Erby, Curator at George Washington's Mount Vernon, gave an interesting presentation to the National Society Daughters of Colonial Wars.  The current National President's Project is to digitize some of the papers at Mount Vernon, including those that Mr. Erby spoke about. 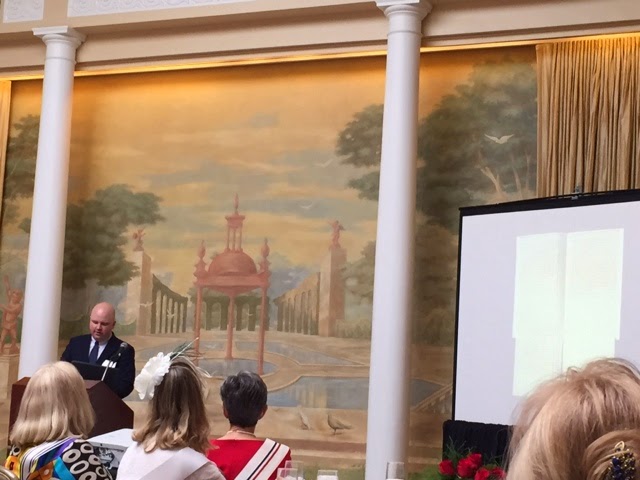 George William Fairfax was the owner of Belvoir Plantation, just south of Mt. Vernon.  In 1763 he traveled to London to buy furnishings for his home in Virginia.  His diary, now in the possession of Mount Vernon, details his purchases and describes many of the pieces he bought.

In 1774, George Washington notes in his ledger, the purchase of many of the same items from Belvoir plantation.  In fact, when the Fairfax family sold their possessions before they returned to England, they sold approximately half of their possesions to their soon-to-be-famous neighbor. 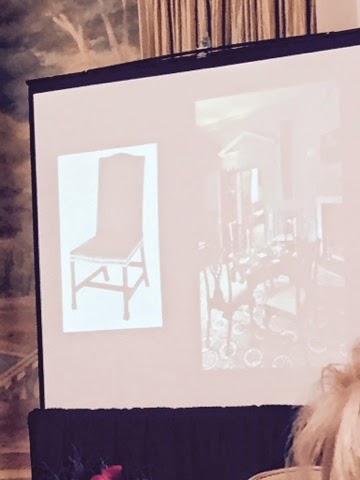 The combination of Fairfax's diary and Washington's ledger have been extremely helpful to the curators at Mount Vernon.  They are now able to recreate several rooms more authentically.  For example, Washington purchased a bed chamber decorated with blue damask at the auction. Based on information about this purchase, as well as from the diary, the curators now know that he painted the room Prussian blue to match his new furniture.

Email ThisBlogThis!Share to TwitterShare to FacebookShare to Pinterest
Labels: NSDCW

Society Saturday - Ancestors Among Us

The Associated Daughters of Early American Witches enjoyed a program by mother/daughter duo Debra Lynne and Addie Avery.  They have been involved in crusading for the exoneration of the Connecticut Witches. 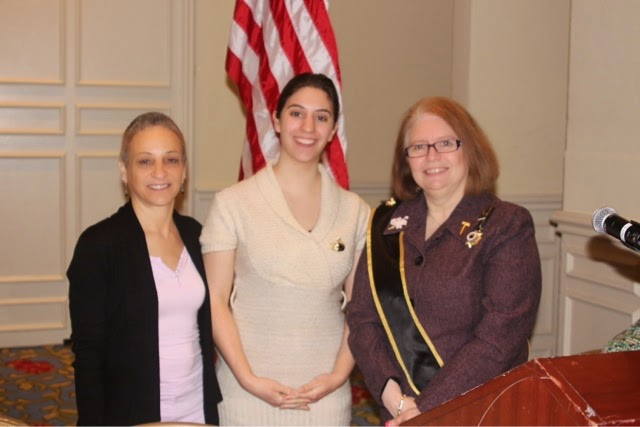 Addie had learned of her ancestor Mary Sanford when she was 13 years old.  She launched a project which involved contacting various Connecticut legislators with the hope of exonerating her ancestor and others.  She told us about her efforts to clear their names.  It was very interesting to hear of Addie and Debra's quest to right a wrong that occurred almost 350 years ago.

The following was used with permission by the author in the Black Swan, Spring 2015 issue.  It was partially excerpted from “Begging Connecticut’s Pardon: A Quest for Posthumous Justice” by Kathleen Powers-Vermaelen, The Black Swan, Fall 2012, p. 2.

Debra and her daughter Addie first learned of their descent from Mary Sanford, a victim of the Hartford Witch Panic, from a visiting cousin in the summer of 2005. It wasn't until they attended University of Connecticut Professor Walter W. Woodward's lecture that October, however, that they realized no official pardon had ever been offered by the state. "Immediately, Addie wanted to right the wrong," said Ms. Lynne. "She has always simply considered it a miscarriage of justice and [believes] that we collectively should be able to look back, acknowledge a wrong, set it right in spirit, and learn from past mistakes." Fueled by determination to see Connecticut's "witches" exonerated, teenaged Addie began a quest to obtain state recognition of the wrongful convictions.

Her efforts led to a meeting with State Senator Andrew Roraback and State Representative Michael P. Lawlor. The result of her efforts—S.J. Resolution No. 26: Resolution Concerning Certain Convictions in Colonial Connecticut—was proposed at the legislative session on March 20th, 2008. At the hearing Addie, her mother,  and Laura Barber Cayer, a descendant of Lydia Gilbert, testified about the shady evidence leading to the witchcraft convictions and officially requested exoneration of the convicted. Despite the abundant enthusiasm conveyed by judiciary committee members that day, the resolution fell by the wayside when the legislature ran out of time. "[We were] really disappointed," said Ms. Lynne. "It would have been easy for the Judiciary Committee to send the resolution to the House of Representatives, but it seemed like it just wasn't important enough."

To date, an official exoneration of Connecticut's "witches" remains stalled. Addie and her mother have not surrendered hopes, however, that something eventually will be done to honor the victims of Connecticut's witchcraft trials. "It keeps surfacing with inquiries here and there about the status of it," said Ms. Lynne. “This, we think, means that perhaps we're meant to see it through after all. Perhaps working towards one or two memorial plaques and then approaching the Governor on a proclamation might be the way to pursue it."