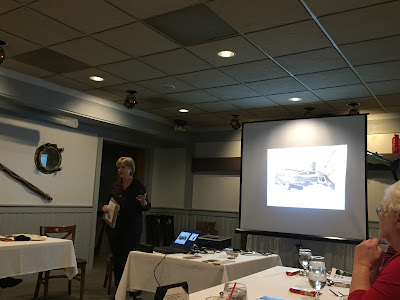 A brand new society, the Descendants of Cape Cod and the Islands, held their inaugural meeting on the cape. 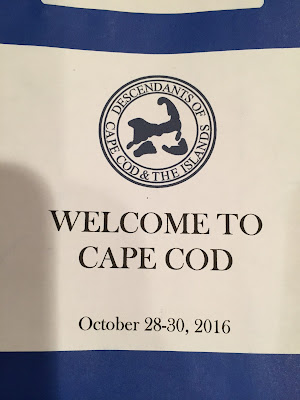 We met at the Dan'l Webster Inn in Sandwich. This was a typical New England Inn and they were very welcoming. 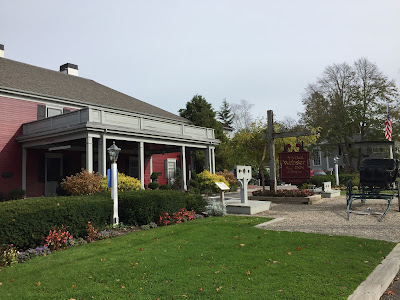 Our first event was a meet and greet on Friday evening.  There were several members there who I had not meet before, along with spouses and other guests. 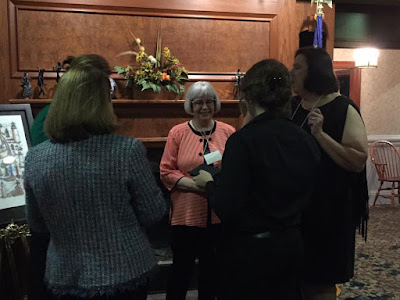 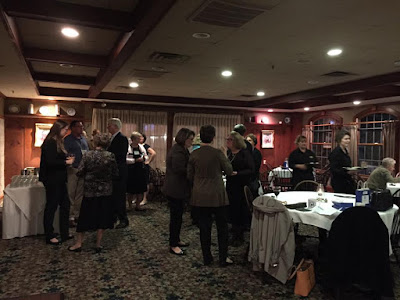 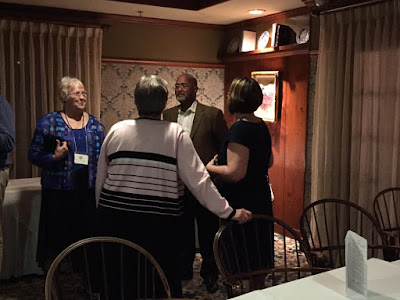 We had our inaugural business meeting on Saturday morning.  Founder Shari Worrell did a marvelous job getting us off and running.  We were proud to announce that we have 125 members honoring 133 ancestors.  Several members have proven more than one ancestor, one has proven 21! 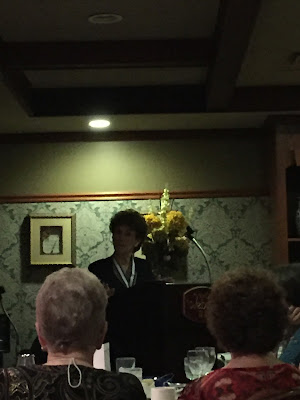 After the business meeting, we walked down the street to the Sandwich Glass Museum.  There we learned the history of this cape industry and had a glass blowing demonstration. 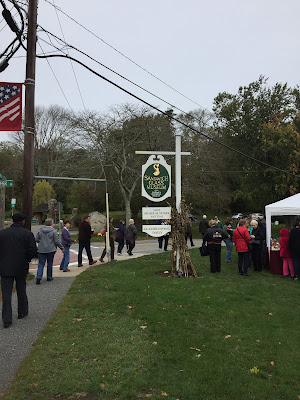 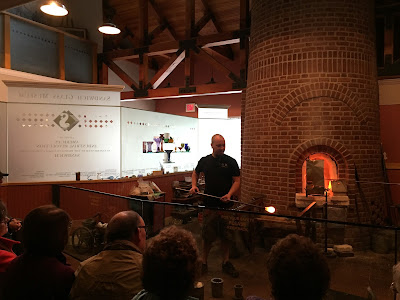 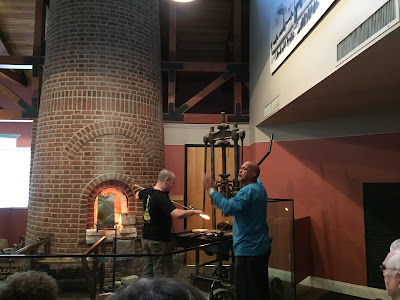 One of us even got the chance to assist the glass maker.

We found a seafood restaurant for lunch where the pagers looked like lobsters.  And of course, I had a "Lobstah Roll". 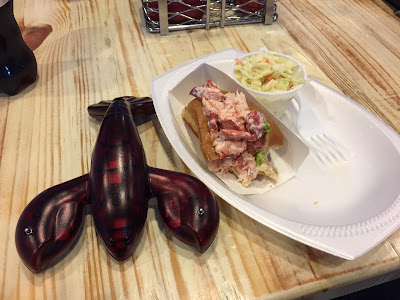 We were on our own in the afternoon.  This was spent shopping at an old fashioned general store, a bookstore with floor to ceiling books, and just walking in this quaint New England town. 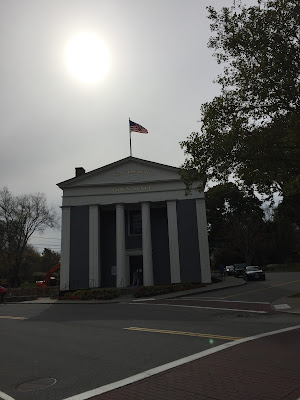 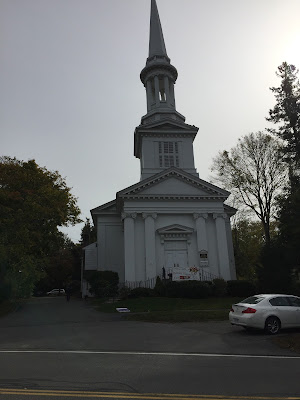 At dinner, we were entertained by local historian Jim Coogan.  He is an expert on Sandwich and Cape Cod history and had many interesting stories to tell. 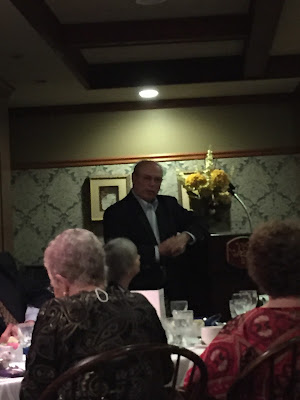 The weekend was a lot of fun and I can't wait to go back next year. 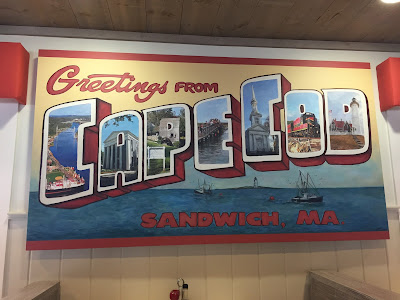 Email ThisBlogThis!Share to TwitterShare to FacebookShare to Pinterest
Labels: DCCI

The National Project of the Daughters of American Colonists is to fund the production of a smartphone app for visitors to Mount Vernon. At our fall board meeting, we were able to try it out.

I have been to Mount Vernon several times, but this trip was a little different.  First, we had a guided tour of the mansion plus a visit to the cellars (not normally included).  We saw where Martha Washington kept her food supplies and learned about the various beverages enjoyed by their guests.  Unfortunately, there were no photos allowed inside, so all I have is an exterior view. 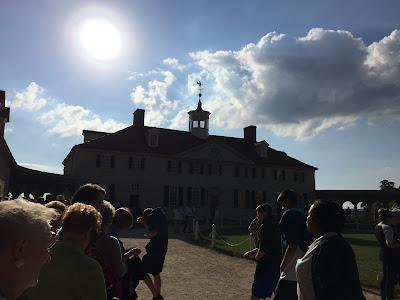 And a view of the river from the mansion. 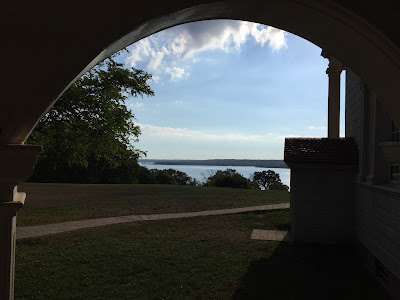 During lunch we were entertained by Nelly Parke Custis, step-granddaughter of George Washington.  She told us about her life on the plantation. 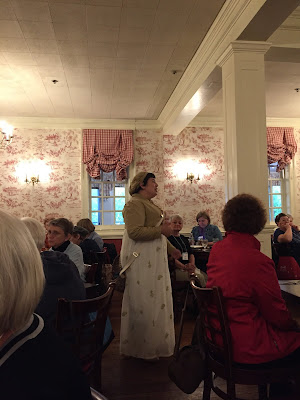 Then we set off to try our hand at spying.  While George Washington's spies operated primarily in New York, and Connecticut, we were able to learn some of their techniques.  The smartphone app starts by giving us our assignment by Agent 711 (Washington himself).  To complete it, we had to travel to various locations on the estate, find secret messages, use invisible ink, eavesdrop on British troops, encode secret messages, and signal for message pickup.  All without being caught!  Since we were operating in secret (and it was pouring rain at the time) I don't have any pictures of us on our mission. 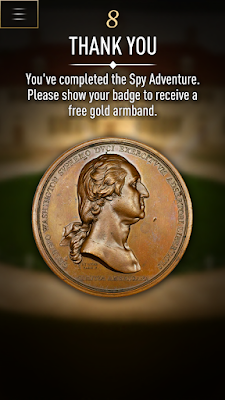 I can show you that I completed the mission and am ranked in the top 10 spy list. 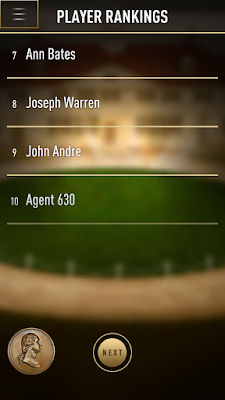 We concluded our visit with a tour of the mill and distillery on one of Washington's adjacent farms.  He operated the mill to make a profit with wheat flour, and to provide corn meal to the slaves and farm animals. 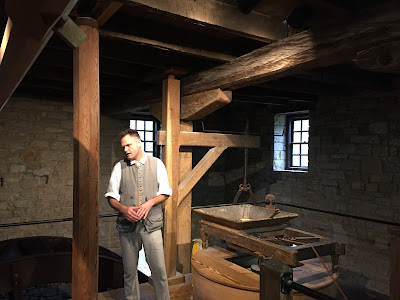 The distillery was recently restored and is fully operational.  They even sell the peach and apple brandy in the gift shop. 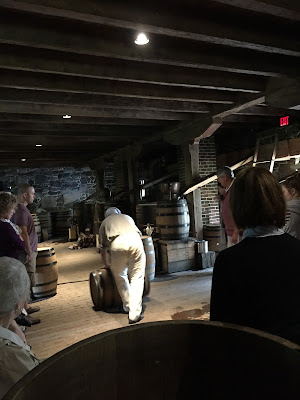