One of the foci of the United States Daughters of 1812 is a spot in England.  It seems a little strange at first, since we were fighting against the British during the War of 1812.  Once you learn the history of the Prison and the Church, it becomes obvious why we support them.

Dartmoor Prison was built between 1806-09 in Princetown, England.  This is near Plymouth and the southwest tip of England.  It stands on a desolate location on the moors.  The original purpose was to house the prisoners of the Napoleonic Wars.

On 2 April 1813, 218 American prisoners of war were forced to march the 17 miles from their prison ship in Plymouth to Dartmoor prison.  Over the next 2 years, the prison would house a total of 6551 prisoners - most were POW's from the War of 1812.

Between 1812 and 1814, prisoners from Dartmoor were used as cheap labor to build a church in the nearby community.  They worked in nearby stone quarries, transported the heavy stones up the hill to the church, and helped to erect the church building.  They were paid 6 pence per day for their labors, but if any one of them escaped, they would all forfeit their earnings.

The US Daughters of 1812 became involved with the St. Michael and All Angels church and the prison in 1910 when they donated a stained glass window to the church.  It is a lovely window and still adorns our membership certificates.


The USD1812 has also been involved with memorializing other areas nearby, including the cemetery where the POWs were buried far from home.

The Illinois DAR tried a different approach this year.  Instead of making 4 one-day stops around the state, DAR days was split into 2 two-day weekends - one in central Illinois, the other in southern Illinois.  Instead of the usual parade of chairmen with their 2 minutes or less presentations, there were several workshops of various interest to different officers - there was something for Regents, Registrars, Treasurers, and Secretaries, to name a few. 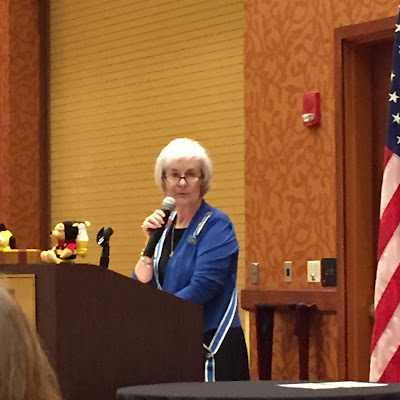 Our State Regent's theme is "Be Yourself, Be Together, Be DAR" and her symbol is the bee.  Some of the chairmen took this to the extreme. 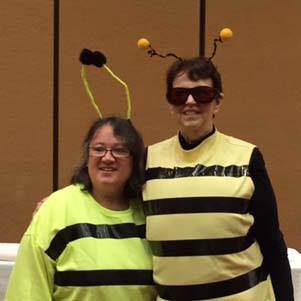 At night we had a presentation on Grave Witching.  It was interesting, but I'm not sure I have any unmarked graves to find. 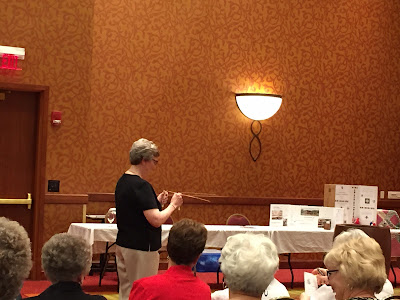