I recently attended the second annual meeting of the Descendants of Cape Cod and the Islands.  This group was founded about a year and a half ago by Shari Worrell.  To qualify, an applicant must prove lineal descent from someone who lived or owned land on Cape Cod, Nantucket or Martha's Vineyard prior to 1700.

This meeting was held in Brewster on the Cape at the beautiful Ocean Edge Resort.  This is on the north coast with a lovely view of the ocean.  We enjoyed visiting outside on the balcony during the opening reception despite the chill in the air.

After our business meeting on Saturday morning, we traveled to Barnstable for our tour.  We visited the Barnstable Historic Society where we were quite impressed by their collections and the organized way they were displayed.  Some of their highlights focused on early Cape Cod history, early industry on the Cape, and maritime history of Barnstable residents. 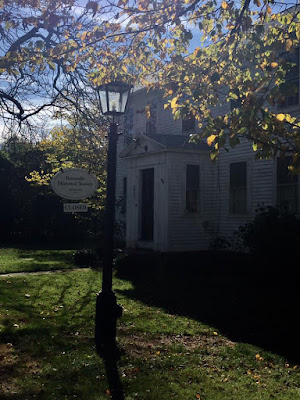 One of the missions of this society is to support the history of the Cape - this was an excellent opportunity to present a donation to their docent.

Then we walked across the street to the Sturgis library.  This serves as the public library for residents of Barnstable, but we were most interested in the older part of the building.  The original portion of the building was built in 1644 for Rev. John Lothrop, one of the first residents on the Cape (and a qualifying ancestor).  This houses the library's considerable genealogical collection.  Admittedly, several members were paying more attention to the bookshelves, than to our guide's description of the building.  We presented them with a donation as well.

The high point of the evening was our banquet and speaker.  He was Richard Pickering from Plimouth plantation.  He told about some of the research at the plantation and a little about several of the Mayflower passengers who also owned land on the Cape.

When he put on the hat, he took on the persona of Stephen Hopkins.  He gave a fascinating first person interpretation, including speaking in the dialect and accent of 1620.  He advised one young man not to marry too soon.  He chided a female attendee for knowing how to read.

All in all it was a fascinating weekend and I look forward to returning next year.