My stay in Washington for Lineage Week concluded with the Associated Daughters of Early American Witches breakfast on Saturday morning.

This is one of the most fun groups to belong to.  Partly because of all of the wonderful ladies (over 500) who belong, and partly because it's just fun to tell people that you're a "witch".

ADEAW has a breakfast every year that is always well attended.  This year, our speaker was Bernice Telian, one of our members.  Bernice had written a book about her ancestor Mary Barnes entitled "My Grandma Mary was a Witch".  She gave an interesting talk about how she learned about her grandmother's brush with witchcraft. 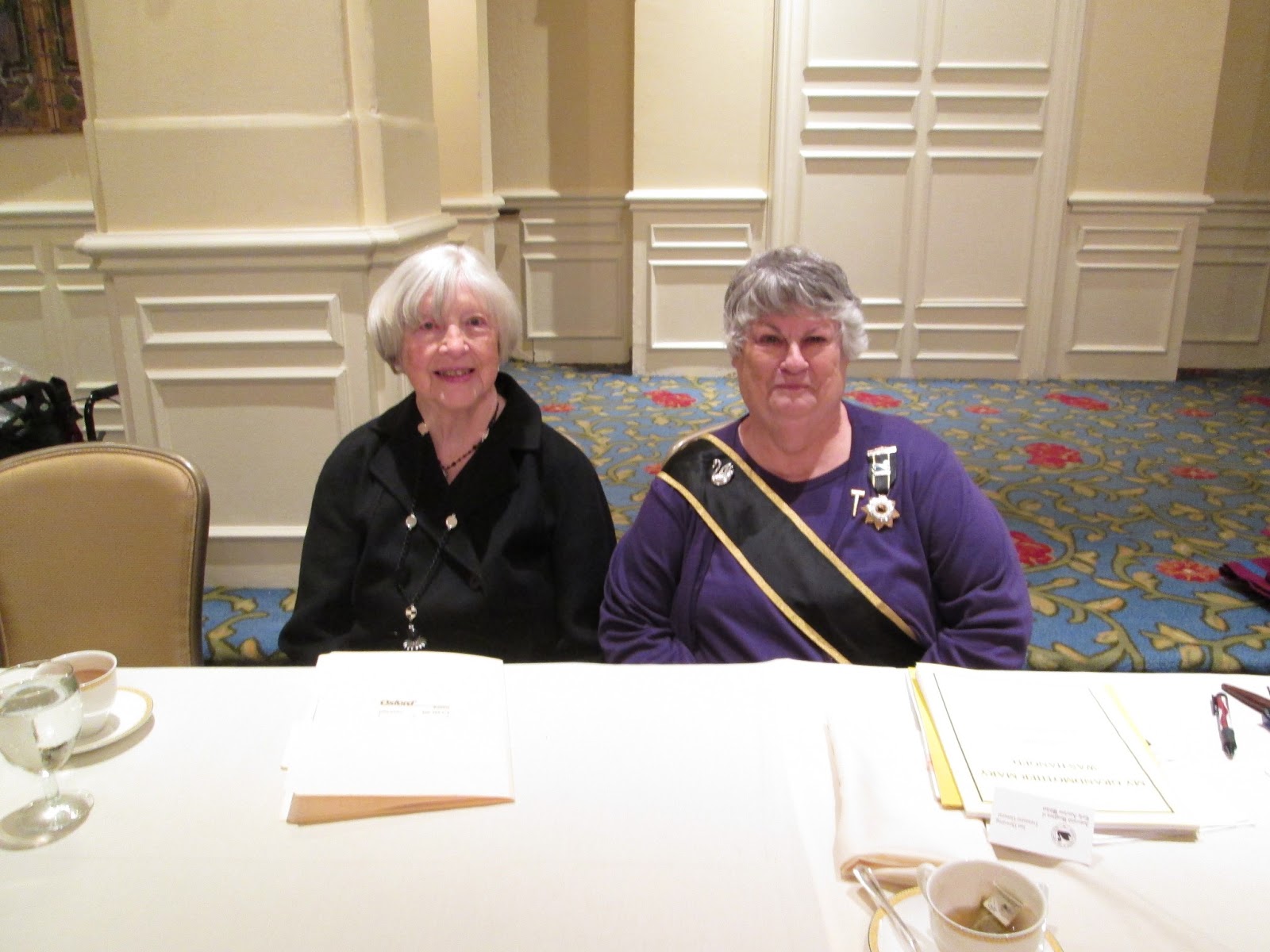 
Mary Barnes was the wife of Thomas Barnes.  They had four children: Sarah Barnes (married John Scoville), Benjamin Barnes, Joseph BArnes, and Hannah Barnes.  Mary was tried for witchcraft in January 1662/3 in Connecticut.  She was found guilty and hanged on 25 January 1662/3.  Several of the ADEAW members claim her as their ancestor.

Bernice concluded with a personal request for the Connecticut legislature to exonerate Mary. 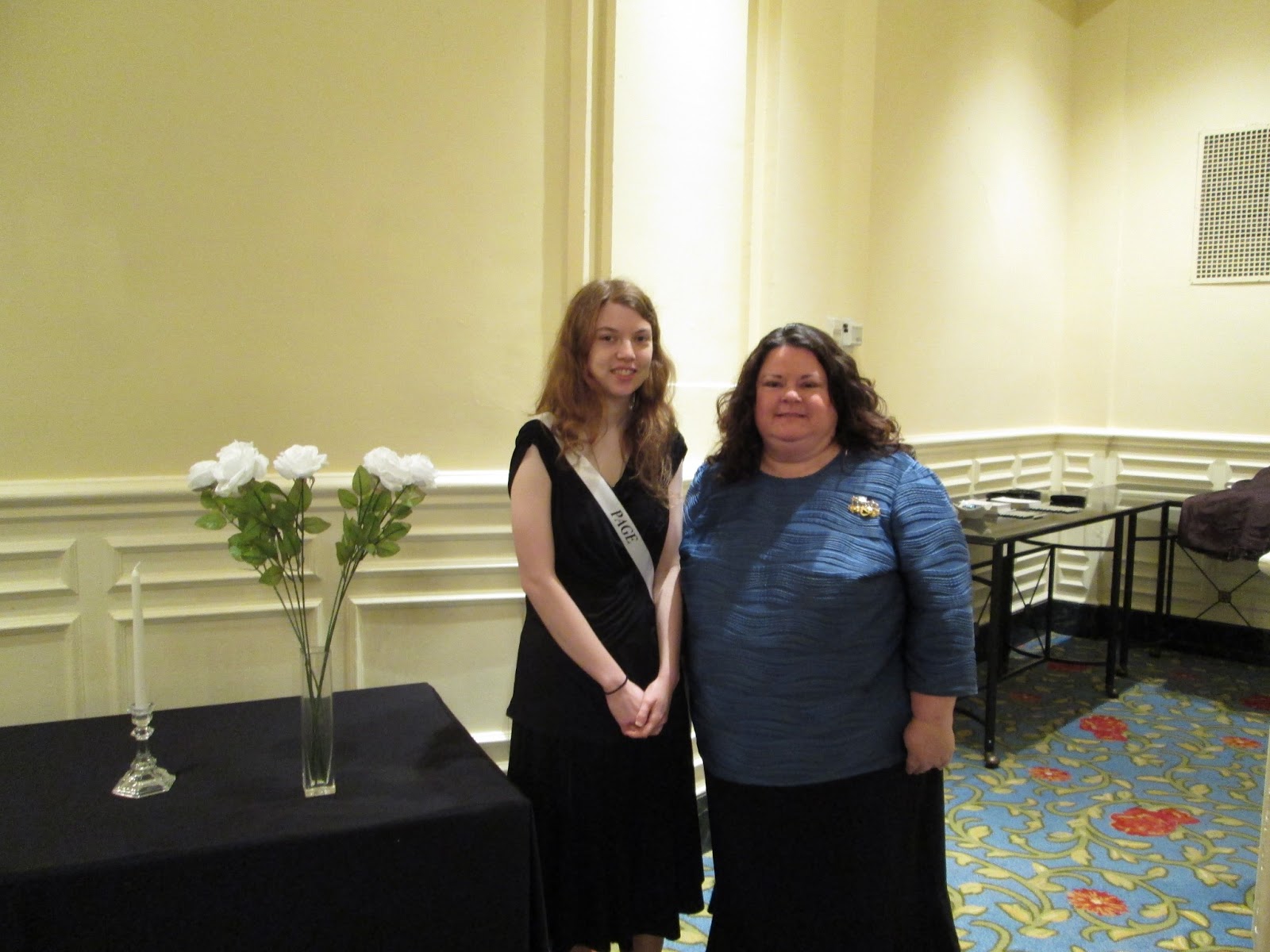 Chaplain Kelly Carey conducts the memorial service with the assistance of our page.

Society Saturday - Dining with the Washingtons

Alright, so I'm getting farther behind with my postings.  I still have a couple to post from Lineage Week, not to mention a few more national meetings since then.

The National Society, Sons and Daughters of Antebellum Planters, 1607-1861 met on Friday of Lineage Week.   They joined the Descendants of Bench and Bar for a black tie dinner at the Army Navy Club.  Both groups have quite a few members that overlap, so it makes sense to have a joint meeting.

In addition to the usual business consisting of a few reports, appointing a nominating committee for Bench & Bar, and installing new officers for Planters, we had an interesting program. 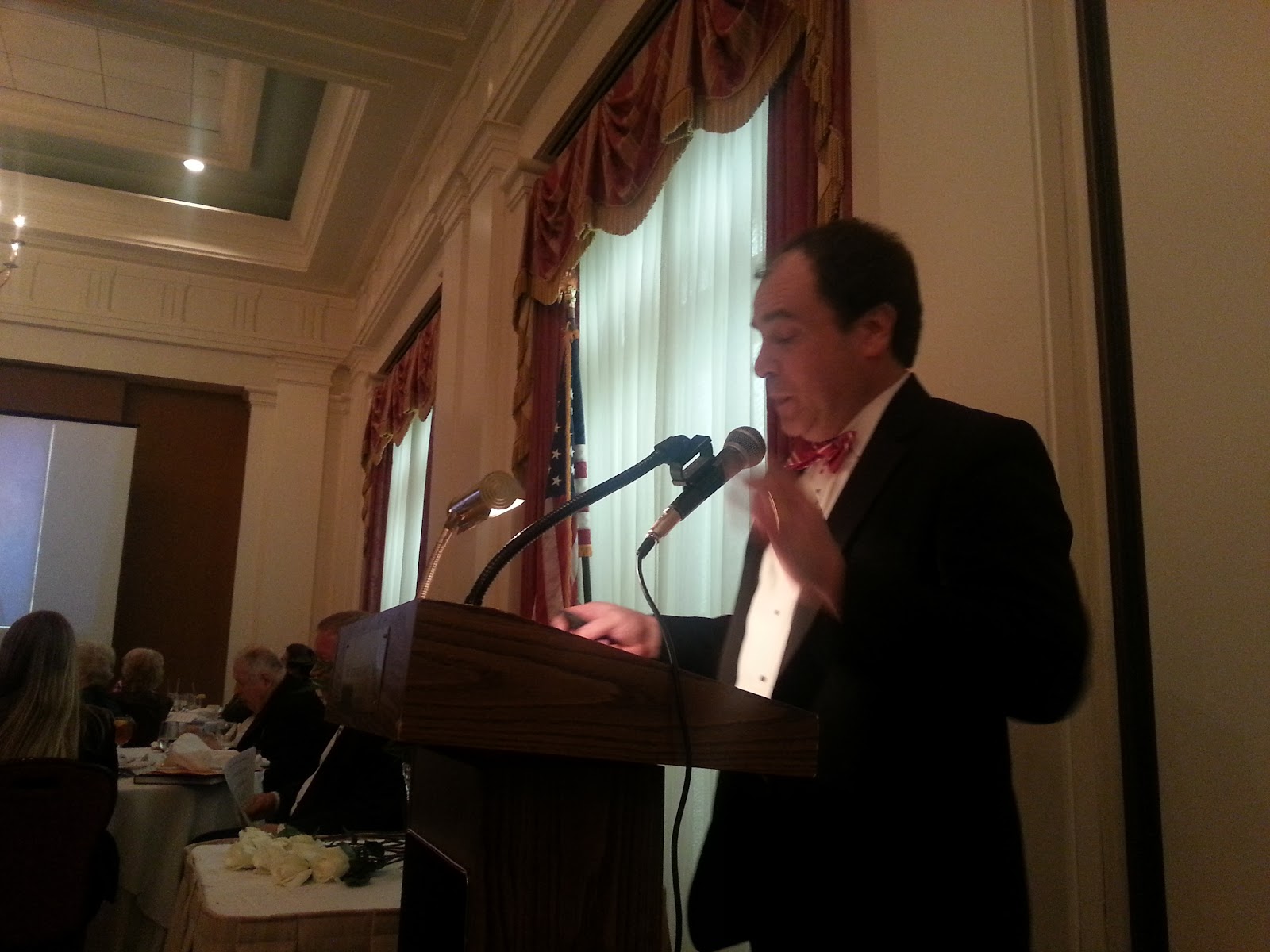 Stephen McLeod, from Mount Vernon entertained us with his program on "Dining with the Washingtons".  He was quite knowledgeable about all of the social events taking place at Mount Vernon when George and Martha lived there.  We learned a little about the interior design of the mansion, the types of food that was served, and how it was served, as well as some of the roles of the slaves who worked there. 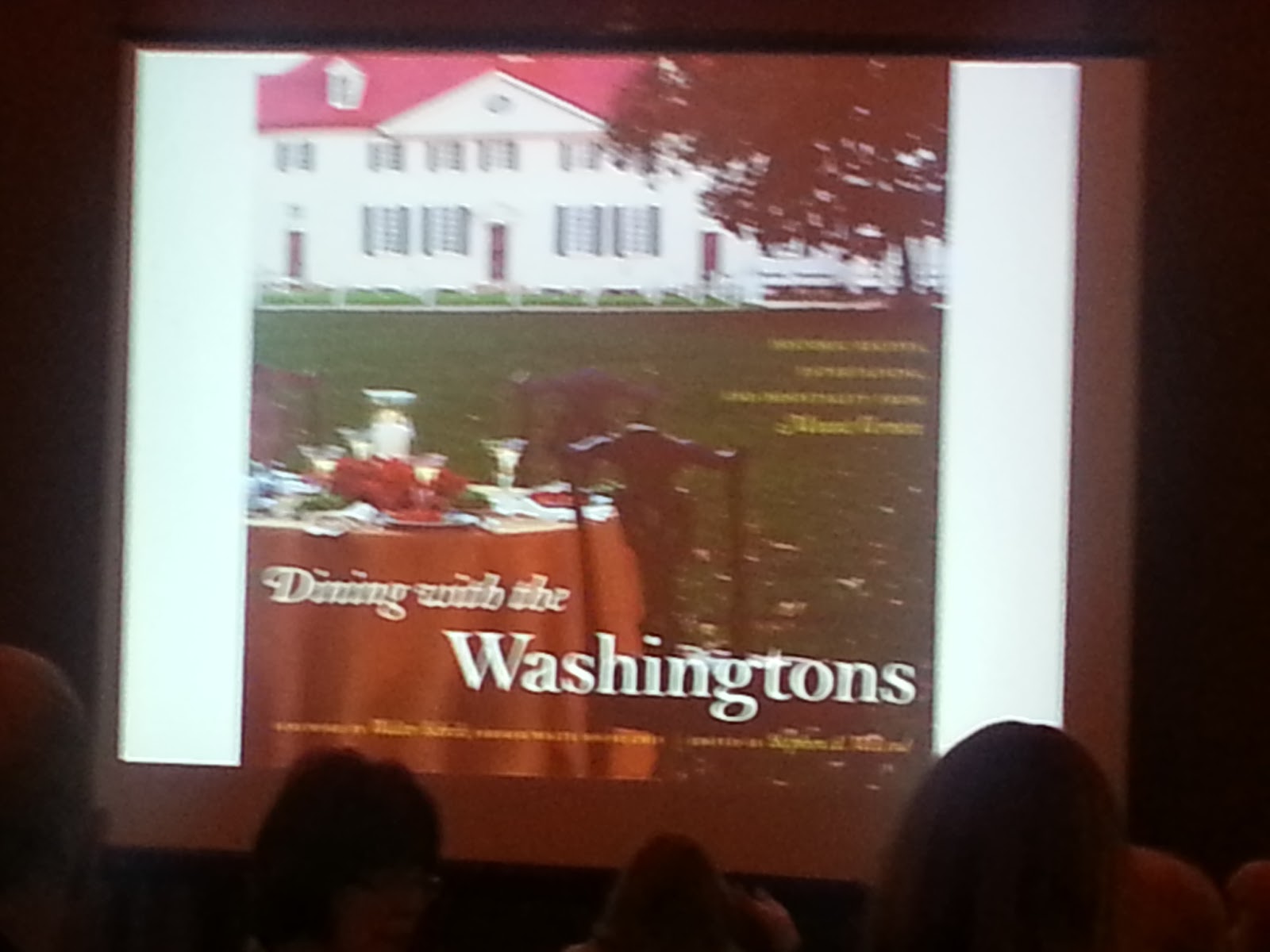 This is one of the more enjoyable meetings of the week - not too much business, an interesting program, and, most importantly, good friends to socialize with.

Three years ago, I decided that it was time to turn my genealogy hobby into a more professional venture.  While I'm not ready to hang up my own shingle, I did want to formalize my education.  I looked into several types of courses.  After speaking with Louise St. Denis at the National Institute for Genealogical Studies, I started their coursework.

The National Institute has several course offerings in different Tracks.  I chose to study American Records.  To earn a PLCGS (Professional Learning Certificate in Genealogical Studies) , I had to take 40 courses, of which 14 were General Courses, 14 were specifically about American Records, and 12 were elective courses.  Most courses are 8 weeks long, with one lesson per week and an exam at the end.  I could actually do them at my own pace, and sometimes would complete 2 or 3 lessons in one week if I had the time.  All courses were completed online.  We were able to interact with others in the course through messages and monthly online chat sessions.

The Generic courses consisted of topics such as "Analysis and Skills 1-3", "Methodology 1-6", copyright, paleography, using the Family History Center, and Genetics.  The American Records courses taught such topics as census records, church records, probate records, etc.  For part of my elective course-work, I chose to each a Basic Certificate in German Records.  This consisted of 4 courses on German Handwriting, German Locales, German genealogic vocabulary and German Church Records.

Some of my course mates were concentrating on other areas such as Canadian Records, British Records or Australian Records.  Other electives ranged from courses on how to use Family Tree Maker or Ancestry.com, and how to plan a family reunion, to research on specific locales.  Some of the elective courses I took were on Mayflower ancestry, researching 20th century ancestors, and tracing female lines. 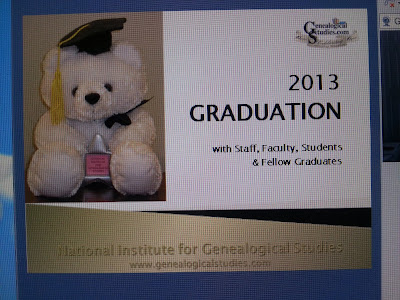 When I started this program, I wasn't sure how long it would take, but I was able to complete my 40 courses in just under 3 years.   I attended the Graduation ceremony virtually through their chat room.  This worked out well, because it was the same day that my daughter graduated from High School and I had to be there in person.

I am now able to add PLCGS to my list of credentials. 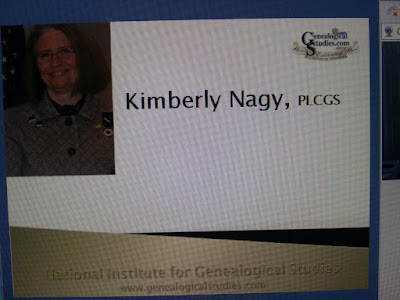 Every year, following General Court, the ladies of  the National Society, Daughters of Founders and Patriots go on a tour somewhere in the greater Washington DC area.

This year they travelled to the U.S. State Department for a tour of the Diplomatic Reception Rooms.  Upon entering the State Department building (after clearing airport-style security), we were led down a series of drab hallways with a very "government-issue" look to an elevator.  When we exited the elevator on the top floor, the surroundings had changed dramatically.  We were greeted by a guide who explained that the Secretary of State, Vice-President and a few other select government officials could use these rooms for diplomatic functions.  The reception rooms were established in the 1960's and furnished over the next 20 years with pieces representing early American art. 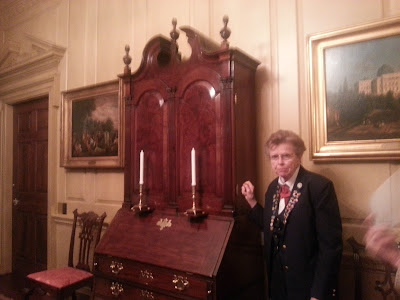 Our guide upon entering the Reception rooms explaining the history of some of the furniture. 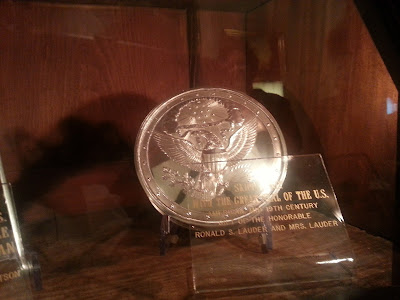 This is a Skippet - a box that holds an official wax seal - used for signing treaties. 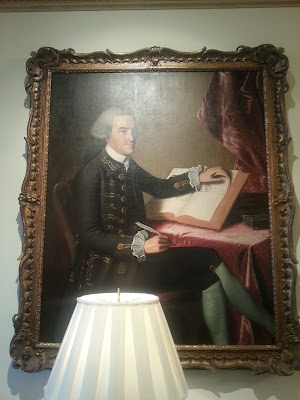 A portrait of John Hancock hangs in the Gallery. 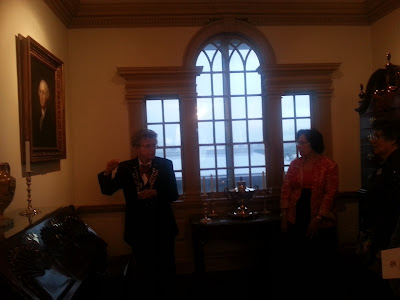 Our Guide points out several items of interest in the Gallery.
National President Irene Walker looks on. 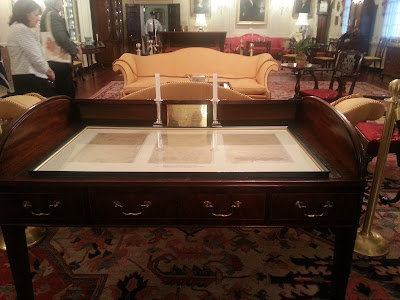 In the John Quincy Adams Drawing Room stands the desk that the Treaty of Paris was signed on. 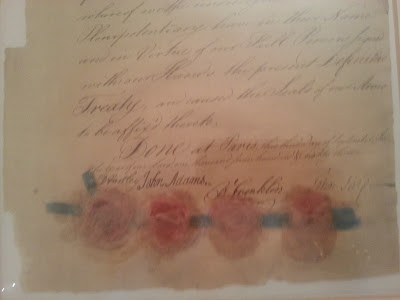 In the desk is one of the original copies of the Treaty of Paris. 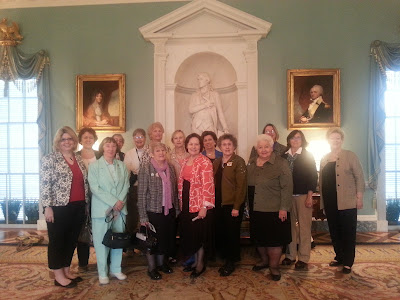 Our tour group in the Thomas Jefferson room