Our entertainment at the recent state meeting of the Daughters of the American Colonists was on the history of music in the colonies.

Sharon and Debbie are two retired music teachers who have researched the topic extensively.  They sang and played the piano with examples of different types of music. 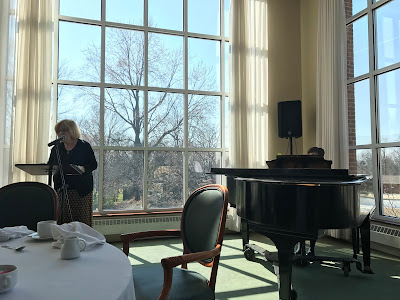 Early colonial music centered on the two most popular topics of the day - religion and politics.  Political topics were primarily things occuring in mother England.  Religious tunes  were biblical psalms set to music, and some early Christmas Carols.

Most songs originated in England and were brought over by the colonists. One of the first songs that they found that originated here was "Invitation to North America".  This tune advertised the abundant land and easy wealth that colonists could find here.  As with most advertisements, this song was somewhat embellished. 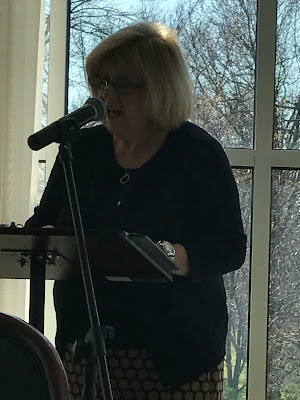 In the 18th century, more secular songs became popular and would tell the news of the day or discuss different ways of life, such as that of indentured servants or sea shantys.  Penny broadsides were often set to music as a proponent of certain political views.

Along these lines, political satires and parodies were popular.  One example was "Sons of Liberty" a response to the Stamp Act.  And of course, one of the most famous political tunes of the American Revolution was "Yankee Doodle".

It was very interesting to learn about some of this country's earliest music.