We were honored to welcome the President General, National Society Daughters of the Union to our John Butler Chapter meeting.  PG Kitty Humphrey is a Veteran, having served in both the Army and the Marine Corps.  She is extremely passionate about Veterans as well as honoring the Flag of the U.S.A., both of which were apparent during our meeting. 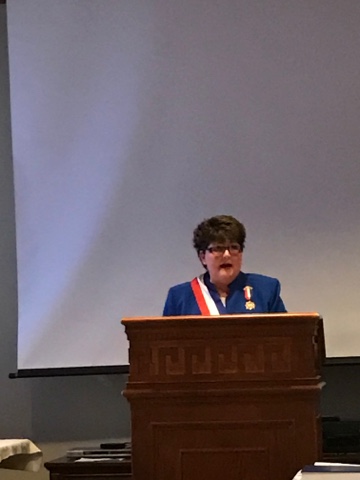 Kitty spoke passionately about one of her National projects - Wreaths Across America.  Many patriotic organizations participate in this project, including some of the other organizations I belong to.

She gave the history of Wreaths Across America, which I hadn't heard before:

The organization was started in 1992 when Morrill Worcester, of Harrington Maine had a surplus of wreaths at his company.  He thought back to a childhood visit he had made to Arlington National Cemetery and decided to donate those wreaths to decorate the graves of our veterans.  A local trucking company volunteered to transport the wreaths, and several other volunteers helped by tying on red bows and placing the wreaths on graves.

They continued to do this every year until 2005 when a photograph of the wreaths on the grave stones went viral.  Suddenly, many others wanted to place wreaths across the country.  Worcester donated 7 wreaths to each state, representing each of the branches of service, as well as POW's and MIA's.

In 2006, wreaths were laid on the same day in over 150 locations, and interest continued to grow.

In 2007, the Wreaths Across America was officially founded as a 501(c)(3) organization.  Their mission is to "Remember, Honor and Teach".

By 2014, over 700,000 wreaths were placed in cemeteries across the U.S.A., as well as locations such as Bunker Hill and the site of the 9-11 attacks.  Every grave at Arlington National Cemetery (over 226,000) had a wreath.  Over 2000 organizations participated in fund raising and placing the wreaths, and it continues to grow.

The actual wreath laying occurs every December - the next one will be on December 16, 2017.