At the recent meeting of John Kinzie Chapter USD1812, we had the pleasure of meeting Mary Young Pickersgill.

She was presented in first person by educator Lynn Rymarz.  She told us of her life, beginning in 1776 in Philadelphia.  Her family moved to Baltimore when she was a child.  After she was widowed at the age of 36, she began a flag making business out of her home.  This was a natural move for her as her mother had been a flag maker during the Revolutionary War.  Her flag making business was well known because Baltimore was a harbor and she sewed many flags for the ships. 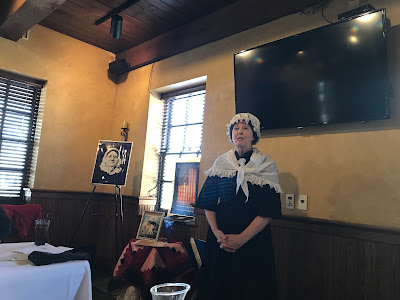 One day in 1813, General Armistead came to her shop and commissioned two flags - a smaller storm flag, and a large flag that could be seen from afar.  Both were to fly at Fort McHenry.  Mary Pickersgill  searched throughout the city for enough cloth for her flag, ultimately buying 400 yards of red, white, and blue wool bunting.  She added white cotton for the stars.

The flag was to be 30 feet by 42 feet.  Each stripe was 24" wide, and each star was 2 feet across.  Because this flag was too big for her home, she assembled it at a local brewery that was not occupied in the summer.  Ultimately, she, along with her daughter Caroline, her mother, and some household servants, working late into the night, were able to complete the flag using 350,000 tiny precise stitches.

Upon completion, she was paid $574 for her work and the flag was flown at Fort McHenry.  This is the flag that inspired Frances Scott Key to write the Star Spangled Banner.