The Illinois chapter of the National Huguenot Society met in Northbrook, IL for our semi-annual meeting.  The room had a lovely view of the DesPlaines river - too bad it was pouring rain outside.

Members of the National Huguenot Society descend from a Huguenot - a French Protestant who, due to religious persecution, was forced to flee France to other countries in the sixteenth and seventeenth centuries. 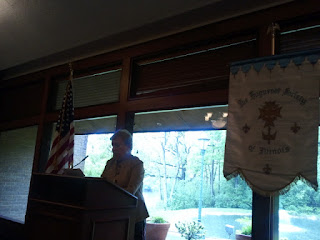 Our speaker at this meeting was Jeannine Sheldon Kallal, former Registrar General for the Society.  She spoke on the history of the Huguenots beginning with the Protestant Reformation in 1517 and continuing until the Edict of Toleration in 1787.  It was a well-researched and interesting talk.