At our Daughters of the Union meeting today we saw a little from the other side's perspective.

Our program was given by Patricia and Rich Healy who reenacted the story of Confederate Soldier Larkin Moon.

They did they by "reading" letters that he had written home to his wife Malinda Brunetta in Chatham Co NC. 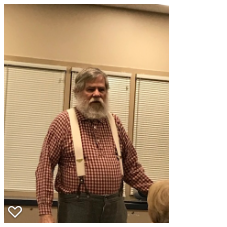 The first letter was written in April 1862.  Larkin was a new recruit fresh from the farm.  He told how they were going to send those Yankees home before the harvest.  He demonstrated how he learned to hold his musket ("shoulder arms") and the nine steps required to load it. 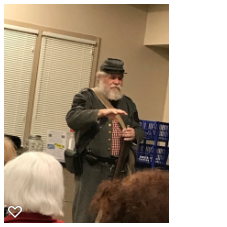 In July 1863 he told of the battle at Gettysburg, how the hill was full of dead and dying boys, in both blue and gray uniforms.  Of the 800 men in Company G 26th North Carolina Infantry, 600 were lost that day. 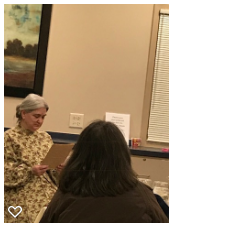 In February 1865 the spirits of the troops were very low.  They had very little to eat and subsisted mostly on hardtack with weevils in it.  Several of his comrades had deserted.

The last letter was written on April 12, 1865 where he told of taking part in the surrender of the Confederate army at Appomatox.  The troops laid down their weapons and said goodbye to the "Stars and Bars". 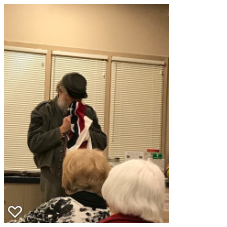 It was a very interesting program from a first person perspective.