I am old enough to remember shopping before everyone went to the mall.  Definitely before everyone spent "Cyber Monday" doing what I just did (picked up a few things from amazon.com).

I remember going downtown to Tiedtke's and Lion Store - the two main department stores in Toledo.  It was an all day outing, and we would be able to buy almost everything we needed at those stores.  Tiedtke's had several demonstration tables set up where the salespeople would show the latest in household gadgets - "It slices, it dices..." or whatever the gimmick was. 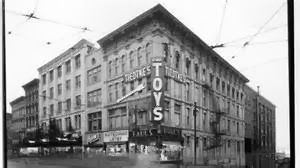 A few of those years I remember traveling to Hudson's Department store in Detroit (about an hour away).  Again, this was an event that we looked forward to.  My favorite memory of shopping at Hudson's was the area that they had set up just for children.  There was a separate room in the store where a child would go shopping without their parents.   My mother would give me a few dollars and I would go in.  The salesladies were always very helpful, and there were a lot of inexpensive items for sale  that I could buy as a surprise for my mother for Christmas.  I believe that I could wrap them in there as well.  I walked out of that room feeling like such a "big girl" having done my own Christmas shopping, and I couldn't wait for my mother to open her gift on Christmas eve.

At this point, I don't remember what I bought, but I definitely remember the feeling of being so grown up.

Not long after this, the shopping malls began sprouting in the outskirts and suburbs.  The downtown department stores ultimately closed their doors and shopping lost some of its magic.
Posted by Kimberly Nagy at 12/08/2013 06:38:00 PM