Yes, the WCTU is a society, but, for the purpose of this blog, one we learned about at a recent meeting of Colonial Dames 17th Century. 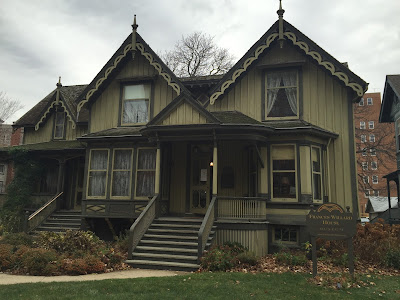 We met at the headquarters of the WCTU in Evanston, IL in the former home of Frances Willard.  The Woman's Christian Temperance Union was founded in 1874 to promote social issues such as temperance and woman's voting rights.  Since women were not allowed to vote, this was one way they could get their message out.  The WCTU was a very effective way for women to organize and promote family values.  Their agenda for social change also included campaigns against sex trafficking and for pure food and drug laws.  They are best known for their support of the 18th amendment (prohibition).  They also helped bring about the 19th Amendment (women's voting rights).  The WCTU is still in existence today, lobbying against alcohol and other substance abuse.

Frances Willard was the second President of the WCTU from 1879 until her death in 1898.  She had led a remarkable life up to that point, including her position as President of Evanston College for Ladies, and then Dean of Women at the Women's College of Northwestern University.  Under her leadership, the WCTU became the largest organization of women in the world.  They were extremely influential during the late 19th and early 20th century. 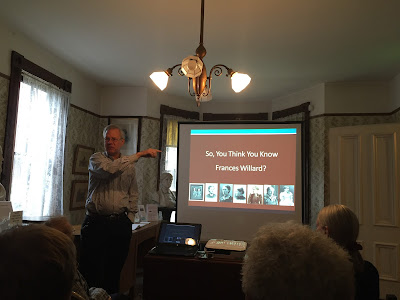 Our meeting included a very interesting talk about Miss Willard by Glen Madeja, Executive Director of the Willard Historical Association, as well as a tour of her home which served as headquarters for her beloved organization.