Society Saturday - Fashions of the Pilgrims

At our recent meeting of the Sons and Daughters of the Pilgrims, we learned about the various fashions that our ancestors might have worn.  A common belief is that the Pilgrims and Puritans wore black or gray without any adornments.  Speaker B.A. Church explained that this wasn't necessarily the case. 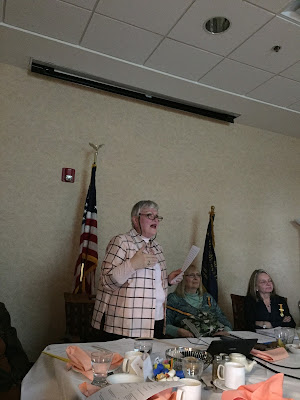 She gave us the historical background of the clothing worn during the early 1600's.  Prior to 1649, Charles I was on the throne.  His followers were known as Cavaliers or Royalists.  Men wore collars made of handmade lace and doublets (jackets) with slashes on the sleeves to show off the undersleeves.  There was a lot of embroidery on their clothing, often with silk or silver-gilt thread.  They would wear the long curled wigs and a big hat with ostrich feathers.

Women would wear poofy sleeves and real pearl necklaces.  Their dress bodices were long-waisted to enhance their tiny waists (often 15" due to corsets).  They wore a farthingale of wicker or whalebone to widen their skirts.

After Oliver Cromwell overthrew the throne, he promoted a much more sedate version of dress.  This is closer to what we think of the Puritans wearing.  They discouraged Frippery on the clothing.  There was no embroidery or other embelishment, collars were made of plain linen.  It was decreed that colors should be subdued.  There was no jewelry, or buckles.  In fact, one could be fined for wearing ribbon or lace, or even dressing above one's station in life. In 1660, Charles II regained the throne and fancier fashion returned to England.  Clothing in the colonies remained more subdued, however, because fancier cloths had to be imported, and people were occupied with making a life in the harsh colonies leaving little time for embellishing clothing.