Society Saturday- The Witch of Pungo 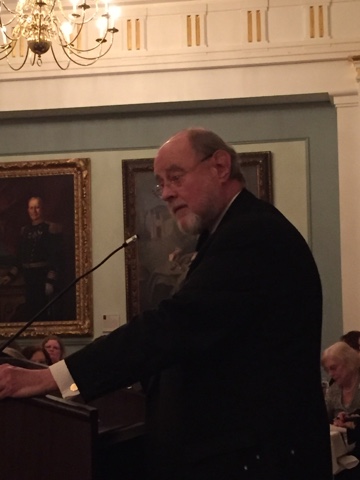 Our Speaker this year was Hon. Richard Bender Abell, former Assistant Attorney General.  He spoke about the trial of Grace Sherwood, also known as the Witch of Pungo.  During his talk, he compared the attitudes of the Virginia colonists with thos of the Massachusetts colonists.  For example, there were 20 executions during the Salem witch panic of 1692 compared with a total of 20 accusations in Virginia between 1607-1730.  The harshest punishment meted out in Virginia was a lashing.  Part of this was because in Virginia, the accuser bore the burden of proof.  If the accused witch was convicted, they could then sue their accuser of slander (this also happened in Massachusetts, but much less frequently).

Grace White Sherwood was known as a midwife and herbalist.  In fact, she was known as the person who introduced the herb rosemary to the colony of Virginia.
Her travails first began in 1697, when she was accused of casting spells on a neighbor's bull.  She brought a defamation suit and won.
The following year,  another neighbor accused her of enchanting his hogs.  She lost the defamation suit against him.
She continued to function as a member of the community until 1706 when her neighbors the Hills accused her of witchcraft through causing a miscarriage of Elizabeth Hill.  This accusation was taken more seriously and a trial ensued.  First, she was examined for "witch's marks" which were apparently found.  Next, she underwent a trial by ducking.  The magistrate and sheriff we easy to pull her back up by a rope but she popped up anyway.  Despite the outcome of these two tests which "proved" she was a witch, no further punishment ensued.  She remained on her farm in Virginia until her death in 1740.
She was pardoned by the Virginia legislature on July 10, 2006, exactly 300 years after her trial by ducking.