At a recent joint meeting of three organizations we were honored to be visited by General Ulysses S. Grant himself.  He told us how he doesn't usually like to make speeches but he made an exception for us. 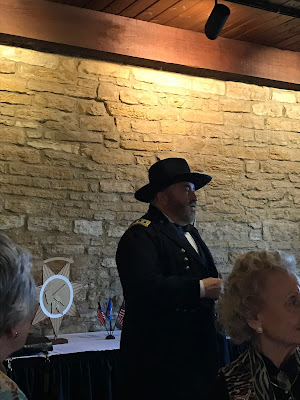 His story focused on his 1863 visit to Washington DC where he met with President Abraham Lincoln to receive his promotion to 3 star general and commander of the entire army.  He explained to Lincoln that he planned to win the Civil War by engaging the Confederate Army at several locations at the same time since the north had the advantage of more men and more supplies.  Lincoln likened his plan to shearing sheep - 4 men to hold the legs while one man does the actual shearing.

His plan worked and soon the south was ready to surrender.  Lincoln agreed with his plan to allow the rebels to keep their horses and mules since they weren't military property, and allow them to return home since the prisons were already full.  They felt that this would help the country heal.

During the surrender ceremony, the confederates laid down their weapons.  The union army actually saluted them as they did so, since they understood all the sacrifices they had made to fight for what they believed in.

He described that there were several aims of victory from the Civil War.  The most well known are re-unification of this country and freeing the slaves.  Other aims were to allow westward expansion via the homestead act and building the railroad- both of which had been placed on hold when money and manpower was diverted to the war effort.  Overall, the Civil War provided a Trial of Democracy that proved our country could endure because of the government system in place. 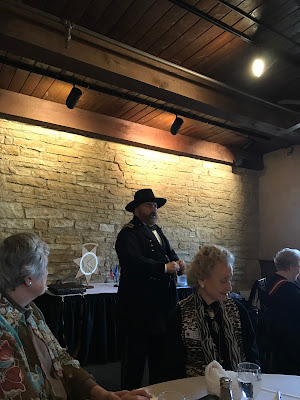 General Grant was actually portrayed by Larry Werline, a first-person reenactor.
Posted by Kimberly Nagy at 4/15/2017 09:00:00 AM