Henry did not have very much time to see the "pretty little town" in England, because within a week he was writing from France.  Note the signature of the censor on the envelope. 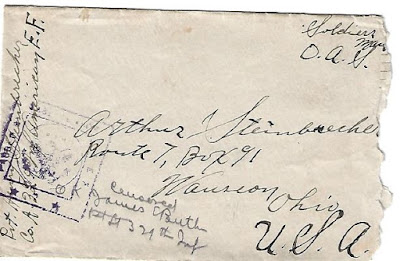 
Dear Parents
I am fine and dandy this nice Sunday morning sure is a dandy no doubt you have been looking for a letter from me before this but you must remember that we are in France and not Camp Sherman.
We were in England for several days and now are in France where we will be for some time. We sure have been  doing some traveling since we left Sherman. It was not so bad in England for there we could talk with the people and here we cant. It will take quite a while to be able to get them to understand us.
I have seen all I care of seeing over here now but no doubt will get to see some more of it before long. I only wish I had taken more smoking tobacco. Had several cans of it but so many wanted to chew of it so I am out now. Bought some here but it is too strong it almost walks off with me. I think after a while we will be able to get some of our own at least I hope so.
You should see how the people here do their hauling. One horse on a two wheel truck some of them load as much for one horse that I used to load for two. The farmers are all busy making hay. Haven’t seen any corn here or in England, some quite nice wheat, oats, and rye. And especially  some very fine potatoes.
You can write to Marie and the rest of them for I will not be able to write to them all. With Love and Best Wishes,
Henry

Dear Parents
I am still at the same place we were last Sunday don’t know how much longer we will be here yet.
I hope we will soon move again to a real place where we can buy a few things once in a while. This is only a small town here so you see it is hard to get very much. They sure have plenty of wine and cider, and some beer but I have not been able to get any of it yet. I wish I had a few bottles of real good beer off the ice. That would sure go good for a change.
We did drill yesterday afternoon or today I done some washing yesterday and scrubbed some of my dirty clothes. This is sure fine weather we have here, always warm in day time some times it gets quite hot, but at night it is usually cool especially towards morning it gets quite chilly.
I suppose you had a good time the Fourth did you have company? I thot maybe Rosa would be there. Or am I mistaken? We did not have to drill that day so we had it quite nice at that. We had some soap and tobacco issued the other day mine is all gonve but expect to get some more in a day or so.
The forenoon I slept nearly all the time, and this afternoon, I was satching the boys play ball. And wrote a letter to Rosa so after this one is finished I will nearly have my week’s allowance of writing so I can take it easy for a week again.
Give my regards to the rest of them and especially to Grandmother.
With Love and best Wishes, Henry


He is missing the beer and tobacco from home. 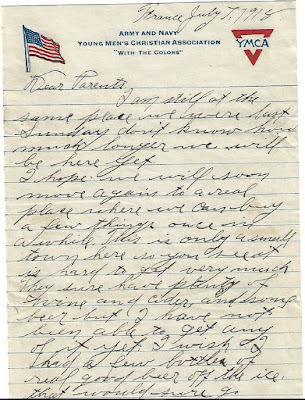