Henry didn't stay at Camp Merritt very long.  The next we hear of him is this postcard received sometime in June 1918. 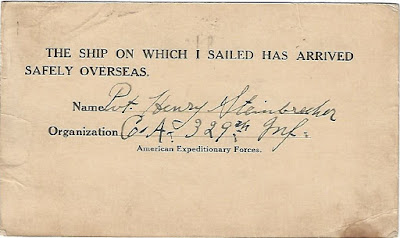 According to the book "A History of the Transport Service: Adventures and Experiences of United States Transports and Cruisers in the World War" by Vice Admiral Albert Gleaves, USN, published 1921 (available on internet archive), there were nearly 280,000 troops transported to Europe during just the month of June 1918.  The transport ships could be American, British, Italian, French or Russian and there were approximately 128 ships in use that month.  One ship could carry as many as 10,000 troops on board!

Based on the next letter, dated "England June 23, 1918" - Henry's ship was probably sailing from June 5 - 21.  Of note, each letter written from this point forward bears the approval of a Censor, so there are few details about camps and battles.


Dear Parents
I am safe and sound in England landed here two days ago we were on the water 16 days had a nice trip no storm only a few days that the sea was quite rough.
This is quite a pretty town near this camp from what I could see by marching thro at night have not been able to get up the in day tim yet.
I suppose you are busy with hay by this time, I seen some of the people here were putting up hay if you need any help let me know and I will be there to help you but maybe not this year. How is every body same as always. How is Grandmother this summer I send her my best wishes. Don’t run your Ford too much or it will wear out.


Don’t foget to tell me all the news and you can write to the rest of them tell them I am getting along fine. With Love and best Wishes, Henry