Well, Henry was finally on his way from Camp Sherman in Ohio.  But where did he go?

Dear Parents.
I am at this Camp for a short time. Got here this forenoon safe and sound and my next trip will be over by the looks of things will try and write you a letter later. With Best Wishes, Henry.
My address. Pvt. Henry Steinbrecher. Co.A 329th Inf. Camp Merritt New Jersey

I believe that when he says "my next trip will be over" - it means "over seas"  or "over there". 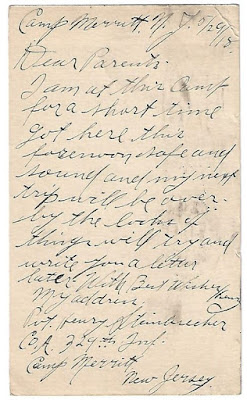 He writes more the next day, telling about his journey over the mountains.  Probably quite an experience for this farm boy from northwest Ohio.


Hoping these few lines will find you all well and happy the same as they leave me. Left Camp Sherman Monday at 2 pm. Arrived here on Wed morning 9 am fine and dandy.
We sure had some trip the second day we were among he mountains. Nearly all day just winding around them all the time the most crooked road I ever was on. I don’t believe that the track was straight for ten rods at a time.
Some places we went over the mountains and some places under them. It is quite cool here and last night it rained some.
This camp is in a woods plenty of shade trees all around some of these trees ought to be in Camp Sherman for it gets awful hot there some time.
We are only about 15 miles from New York City so you see we are near the ocean that makes it quite cool here.
I don’t think we will be here very long only long enough to get the rest of our Clothes and other equipment.
They are giving 24 hour passes to New York City to all those that want to go. About 40 a day. I don’t think that I will go do not care about going to the City have seen plenty of big cities they are all about the same.
Does John know when he will have to leave for Camp or not.  Has Rosa been to see you since she is back home again.
I want you to take good care of her and take her out riding in the Ford some time when you go to town or some place for you like that yourself. I don’t know much news so I will have to ring off but will try and write you some more before we start across if possible.
Don’t work too hard and don’t forget to write to me for I am always glad to hear from you.
With love and Best Wishes, Henry

According to wikipedia, Camp Merritt was a transient base in Bergen County, NJ which served as the embarkation port for approximately 1 million troops.  From this base they boarded ferryboats to Hoboken, NJ where they left on transport ships for Europe.