Henry is still feeling a little homesick.  He wants to receive more mail but thinks it is getting lost.  He is able to keep up on news from home in the Army newspaper.

He asks about his younger brother Lorenz Steinbrecher who had moved to Hammond Indiana to find work. 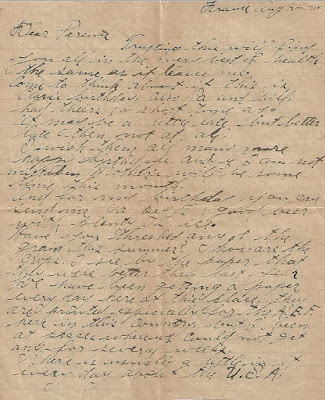 France Aug 24, 1918
Dear Parents,
Trusting this will find you all in the very best of health the same as it leaves me. Come to think about it this is Clara’s birthday, also Pa and Will had theirs a short time ago. It may be a little late but better late then not at all.
I wish them all many more happy birthdays and if I am not mistaken, Mother’s will be sometime this month. And for my birthday you can send me a keg of good beer with plenty of ice.
Have you threshed any of the grain this summer? How are the crops. I see by the paper that they were better than last year. We have been getting a paper every day here at this place. They are printed especially for the A.E.F. here in this country but I been at places where we could not get any for several weeks.
There is usually a little in it every day about the U.S.A. I don’t know what I will do if my mail ever find me and I afraid I will have to take seeral days off to read it all.
One of the men here got 75 letters all at one time going some isn’t it. Have not been able to see Dan. Wrote him a letter long time ago but have not received an ans. yet. Met a man from the same company he is in and he told me that the last time he saw him a few weeks ago. Dan all O.K. feeling fine.
Have you heard from Lorenz lately is he still at Hammond at the R.Y. office?
I see by the papers it will soon get him for if I remember right he is 20 years next month.
When you see Wills’ give them my best wishes and any of the others also. Would like to write them each a letter, but that is impossible so they will have to be satisfied without. I want you to be a real good boy and mind your teacher. You can take Rosa to the fair for your girl this year, she will show you a good time.


With love and Best Wishes,

He remembers that it was his sister Clara's birthday.  Clara was born August 24, 1895 and married William Stromberger in 1914.


He also mentions taking Rosa to the fair - this was probably the Fulton County Ohio fair that was celebrating its 50th anniversary in 1918.