One of the most fun lineage groups that I belong to is the Associated Daughters of Early American Witches.  These are ladies who can trace their roots back to someone who was accused, tried, or convicted of witchcraft in the colonies before 1700.  They have a breakfast meeting every year and are planning their 25th Anniversary meeting for 2012.
Everyone knows about the witchcraft hysteria in Salem in 1692 but there were actually accused witches before and after that time.  There are more than 300 ancestors who are acceptable for membership.  Most were in New England (not just Massachusetts, but New Hampshire, Connecticut and Rhode Island) but others can be found in Pennsylvania, Maryland and Virginia.
My own "witch" was Mary (Bliss) Parsons (ca1620-1711/2).  She was first accused of witchcraft in 1656 in Northampton, MA.  Her husband filed a slander lawsuit against her accuser Sarah Bridgman and the accuser was fined.  She was accused again in 1674 by the same family.  She spent time in the Boston jail and was acquitted at trial in May 1675.  Accounts of the slander trial are in existence and are fascintating to read - giving a glimpse into the superstitious beliefs of the time. 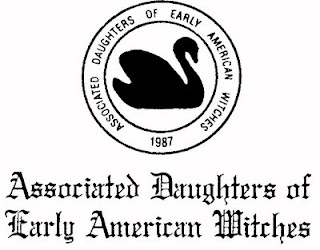