Society Saturday - On the I & M Canal

The Isle a la Cache DAR chapter had their 1st birthday celebration today.  Hard to believe that we have only been a chapter for a year.  We started with 12 members and now have 34 ladies with several more in process.  Our members are young and enthusiastic and we enjoy getting together.

Our program today was given by one of our HODAR's (husband of DAR), Ron Vasile.  Ron worked for the I&M Canal Historical Society for several years, so he is definitely an expert on the subject.  It was a beautiful fall day which was perfect for a walking tour of the canal.

The Illinois & Michigan canal was built between 1836 -1848 to connect the Great Lakes with the Mississippi River.  This was a major boon to transportation and shipping of goods and contributed quite a bit to the settlement of northern Illinois. 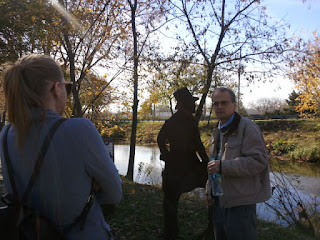 Ron explained how many of the workers were Irish immigrants.  The work was dangerous because they had to use black powder (gunpowder) to blast through the limestone.  In addition, there was the danger of disease such as cholera and dysentery.  Many were killed trying to dig this 96 mile canal 60 feet wide and 6 feet deep.  ﻿ 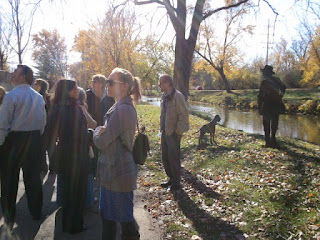 The canal boats were pulled along by mules, driven by boys who walked alongside the canal on a mule path.  Travel across the state of Illinois now took only 24 hours by boat - previously three weeks along muddy roads.  In addition, grain could be brought to Chicago to sell or ship east - one of the reasons Chicago grew and thrived during this period. 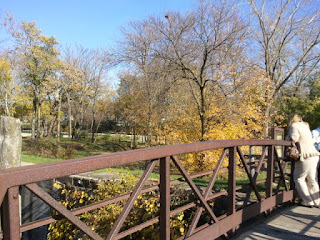 ﻿
The canal has 17 locks because the water level is higher in Chicago than at the Mississippi.  The first lock is partially intact at Lockport, IL.
We enjoyed learning about this important piece of Illinois history.﻿
http://ildar.org/chapters/islealacache/
Posted by Kimberly Nagy at 11/05/2011 06:28:00 PM