My mother, Ruth Steinbrecher Ormsby grew up in Whitehouse, Ohio.  Whitehouse is a small village just southwest of Toledo in Lucas County, Ohio.

She went to Whitehouse School and graduated in  1942.  While she recently celebrated at her 70th reunion, the school itself will turn 80 years old on October 5, 2012. 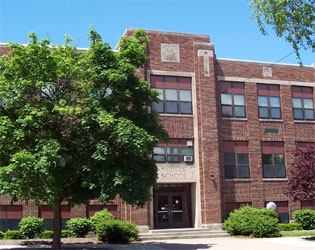 My mom was interviewed for the "Maumee Mirror" article about the school anniversary, so I thought I'd interview her a little as well.

She was one of the first students at Whitehouse school, attending 5th grade there the year it opened, and continuing on until she graduated in 1942.  At that time all twelve grades were in the same building and each class was in its own room.

She tells me that there were 34 students in her graduating class, about 22 of whom had been in the same class throughout all 12 years.  Of those 34 students, 11 are still alive and most get together every September for a class reunion.  They even had a former teacher attend the reunions until she died just before her 100th birthday!

She had daily recess in lower grades and a study hall in high school.  Lunch was a hot meal for 15 cents in the cafeteria.  If students misbehaved, they had to stand in the hall.  If a teacher caught a student chewing gum, they would make the student stand in front of the class with the gum on his nose.

Classes included English (which included public speaking), Various Mathematics, Various Sciences, Latin, Home-economics, Shorthand, Typing and Bookkeeping.  She hated public speaking but loved Latin.  She thought she wanted to be a nurse and Latin was required.  Even though she won district medals for Latin, she decided to focus on practical courses so she work as a secretary when she graduated. 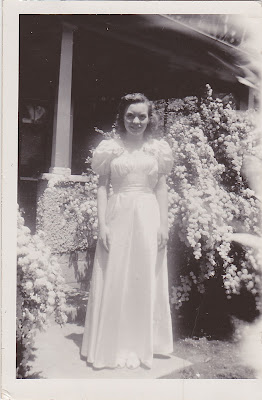 Mom in her prom dress - ordered from the Sears catalog


There was a prom during her junior and senior years.  It was normal to go with your friends, and not with a date.  The prom was held in the school gym.

Graduation was a fairly small ceremony for students and their families in the gymnasium/auditorium.  Mom's parents, younger sister and Aunt Mamie came to hers.  The graduates sat in 3 rows - the first row wore blue gowns, the second row wore white and the third rom wore red.  This was because she graduated in 1942 at the beginning of World War II. 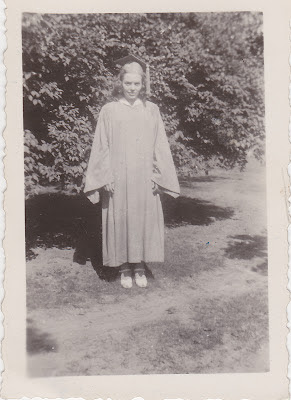 Mom in her blue graduation gown

Graduation parties were unusual, but my mother was treated to an Ice Cream Soda at the Drug Store Soda Fountain - something very special!

I really enjoyed talking to my mother about her school memories. 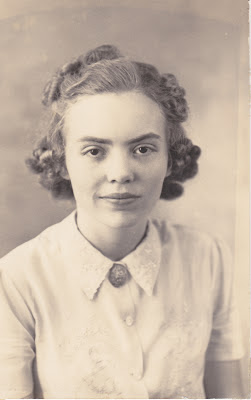 Here is the link to the newspaper article Whitehouse School's 80th Birthday Calls for Celebration, Recollection
Posted by Kimberly Nagy at 10/04/2012 09:00:00 AM