Society Saturday - Dames of the Court of Honor

Today was the annual meeting of the Illinois Society of the National Society Dames of the Court of Honor.
We met at Tom's Steak House for lunch and a meeting.  We had an interesting program given by Ellen Stortz about "Trees of the White House".  Charter member JosefaLee Hammond reminisced about early days of our chapter.  The 2011-13 officers were installed. 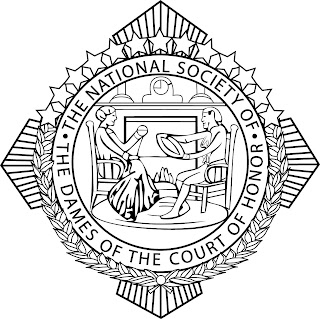 The Motto of this organization is "Noblesse Oblige" which means Rank Carries Obligation.  Membership in this organization requires proof of lineage from a commissioned officer who served in a conflict prior to 1865, which includes several colonial wars, the Revolutionary War, War of 1812, the Mexican War or Civil War.

My qualifying ancestor is Lieutenant Thomas Leffingwell.  He was born in 1622 in  Croxhall, County Derby, England.  He immigrated to this country by 1637, settling first in Saybrook, CT.  From there he moved to Norwich, CT where he served as their Deputy to the CT Legislature in 1662, 1663, and 1665.  During King Philip's War, he served as Lieutenant.

He married Mary White and they had 7 children.  I descend from his daughter Mary Leffingwell who married Joseph Bushnell.
Posted by Kimberly Nagy at 8/27/2011 04:53:00 PM