The Illinois Chapter of DFPA met today for lunch and planning.

We have some exciting things coming up - we are hoping to host the National President Donna Derrick at a meeting this year.  Donna will finish her term in April, so we will be honored if she comes all the way from San Diego to meet with us.

We are planning some joint meetings with other lineage groups in the area.  Because there is so much overlap in our membership, a joint meeting gives us an opportunity to "kill two birds with one stone" - cutting down on time and travel requirements.

Finally, we are hoping to host one of the National Society's October Board meeting in the future.  We talked about various locations such as Chicago vs. Springfield, and brainstormed some tours and activities we could do in each location.

Our chapter has 44 members with other ladies working on their applications.  Membership is somewhat restrictive, because it is through only the male line.  Basically, you need to trace your lineage back through either your paternal grandfather (using your maiden name) or your maternal grandfather (using your mother's maiden name) to a "Founder" (someone who was here prior to 1687 with a Revolutionary War "Patriot" in that line. 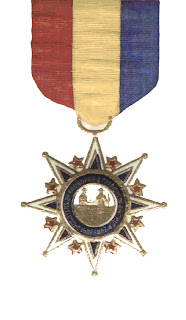 My Founder is: my 9th great-grandfather Richard Ormesby, who was born in Lincolnshire, England ca 1602.  he came to the colonies on the ship "Abigail" and settled first at Saco, Maine.  He married Sarah Upham ca 1640 and they had three children, John, Thomas and Jacob.  Richard lived in New Hampshire for a short period, then moved to Salisbury, MA and finally to Rehoboth, MA where he died in 1664.

My Patriot is: my 5th great-grandfather Nathaniel Ormsby, who was born in 1734 at Norwich, CT.  He married Elizabeth Perkins in 1759 and they had 8 children.  Nathaniel served as an Ensign in the French and Indian War, then in the Continental Army in 1777.  He was captured by the British and died at Albany, NY while captive on 25 October 1777.