From Russia, With Love - Part 1

My maternal Grandfather's parents and grandparents were natives of Russia who immigrated to the United States in 1892.  They were part of the ethnic group of Germans living in Russia.

Historically, in 1762-3, Catherine the Great of Russia issued an invitation to Western Europeans to travel to Russia to settle and farm the land.  They were promised religious autonomy, the ability to maintain their own culture, and freedom from the military draft.  Between 1764 and the early 1800's, hundreds of thousands of Germans settled in Russia.

My Steinbrecher ancestors settled in Donhoff (German) or Gololobovka (Russian), a town southwest of Saratov, east of the Volga river.

In 1872, Alexander II revoked the previously granted privileges.  Germans began to be drafted into the Russian army, and were discouraged from practicing their own culture, language and religion.  For this reason, many Germans from Russia began to leave.  They traveled to the United States, especially the midwest and great plains.  Many also traveled to Canada, Brazil and Argentina.

My ancestors were Lutheran.  This is the Lutheran Church in Saratov, the nearby city.  If there was a church in their town, it is no longer there. 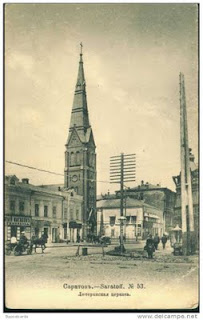 For more information about the Germans from Russia, visit http://www.ahsgr.org/. ﻿
﻿