From Russia With Love - Part 2

My great-great-grandparents, along with some of their children made the trip from Doenhoff, Russia to Ohio in 1892.  The first step then, as it is today, is to obtain a passport - 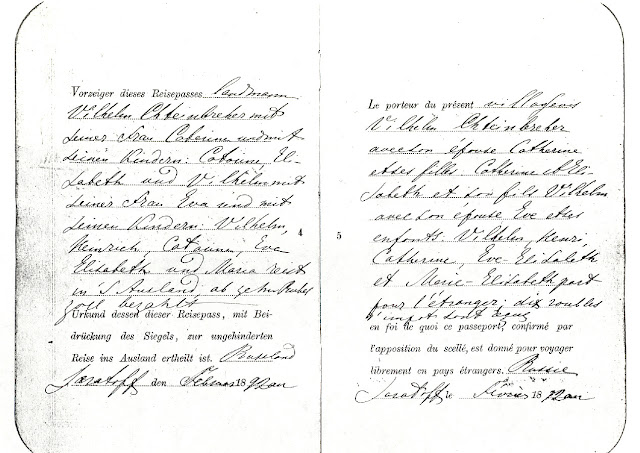 This is a page from their passport - it is predominantly in Russian, however there are some sections in German and in French.  Note that I said "their" passport - the family shared this document.
Listed on this page are Wilhelm Steinbrecher, his wife Catherine, their children Catherine, Elisabeth and Wilhelm, along with Wilhelm's wife Eva and their children Wilhelm, Heinrich, Catherine, Eva Elisabeth and Maria.  Basically, eleven people in three generations planned to travel.

They boarded the steamship "Oldenburg" in Bremen, Germany for their journey across the atlantic.

Their ship arrived in Baltimore, MD ﻿on 14 April 1892.  The passenger list gives the following details about the family:
Wilhelm Steinbrecher, age 57 year old male traveling in a family of 11.  Their nativity is Russian, last residence is "Ternhoff".  Their destination was Iowa and his occupation is farmer.  Their religion is protestant and all are in good health.  Wilhelm is the only family member with money and has $15 cash for the voyage.
Other family members are listed:
Catherine 55y female, Wilhelm 32y male, Elizabeth 27y female, Wilhelm 7y male, Catherine 5y female, Eva 3y female, Elizabeth 2y female, Heinrich 1y male, Catherine Elizabeth 20y single female, Elizabeth 5y female. 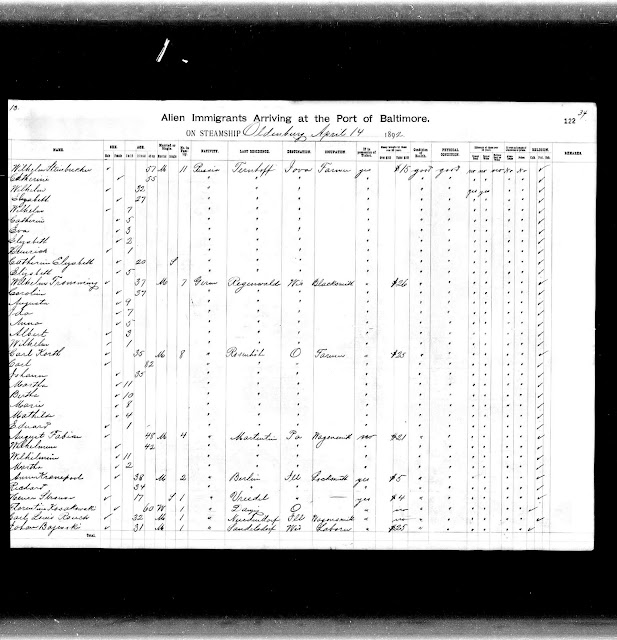