George was born 29 November 1838 at Decatur Co., IN to Thomas and Hester (Critser) Wiley.  When he was 22 years old, he moved to Clark Co., IL with his parents and made a living as a farmer.

He served as a Private in Co. B, 2nd Illinois Light Artillery "Madison Battery" from 26 August 1861 until 31 August 1864.  According to the "History of Crawford and Clark Counties" published in 1883, he "participated in the battles of Pittsburgh Landing and Corinth, and came out unscathed".  George returned to Clark County where he married Susan Mumford on 14 January 1865.  She was the daughter of Levi and Mary (Funk) Mumford and was born 4 April 1844 at Martinsville, Clark, IL.

George is described as having light hair, blue eyes and standing 5 foot 9 inches tall.  He was a democrat and served as County Supervisor in 1882.  He was a member of AF&AM Casey Lodge #442.

Apparently, as George grew older, he realized that he was not as "unscathed" as the County history claimed.  He applied for a military pension for reasons of: chronic cough, piles, rectal prolapse, injury to "lower bowels and testacles by lifting heavy timbers...resulted in complete loss of right testicle"...causing "privates to swell and turn black" (NARA pension files).  In a letter written to his granddaughter Ethel Wiley Troughton dated 12 September 1919 he tells her that he sustained "3 bullet holds in my close 2 just grasing the hide". 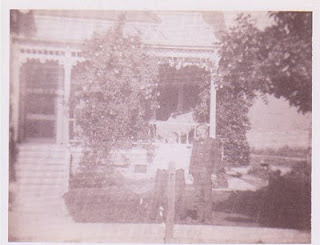 Susan died of cerebral hemorrhage and paralysis on 15 January 1916.  George died of bronchitis and gastritis on 1 January 1920.  They are buried in the Pomona Cemetery at Pomona, CA. 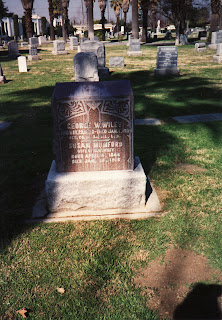