At a recent Colonial Dames Seventeenth Century meeting, we learned about the "Brothers' War".  The meeting started off at a member's home where we conducted business and had a nice lunch.  Then we traveled to Grayslake, IL Historical Society.

There, Society Director Dave Oberg told us about the Brothers' War - ie. the Civil War.  He was in costume and told of the 50 young men from the Grayslake area who fought for the Union.  At the time, the town of Grayslake did not exist, and these were predominantly farm boys who fought. 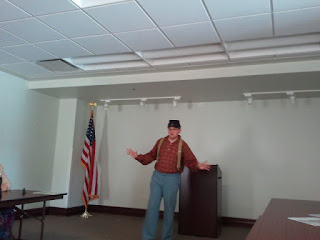 ﻿
He gave an extremely interesting and well researched talk about many of the young men.  He told of the battles they were in, showed portraits of some of them, and made connections to some current local residents.

Along with some excerpts of letters and diaries written by these men, he also entertained us with songs that were popular with the troops. 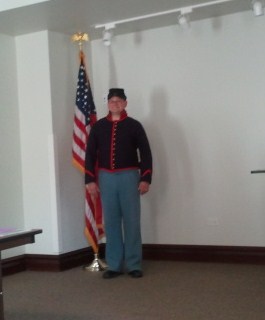