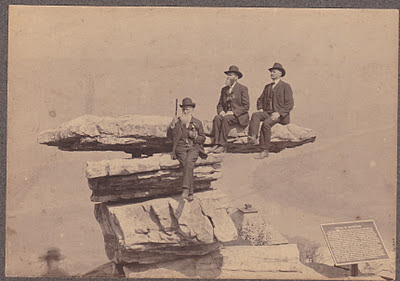 Apparently, it was quite popular for veterans to visit Lookout Mountain and reminisce.   This photo shows my great-great-grandfathers C.C. Ormsby, J.J. Neeley and Dick Shores posing atop the Mountain.  ﻿
Charles Clark Ormsby was in the 123rd Illinois Infantry which camped at Maysville, AL during this time.  Although his regiment did not fight at Lookout Mountain, it was a great photo op.
I am not sure who Dick Shores was.  He may have been the Richard Shore born ca 1848 in Ohio who served in the 149th Indiana Infantry and died 30 August 1930 in Casey, IL (Pension index at NARA).  The census lists Richard Shore living in Casey, IL in 1880 (born ca 1848 in OH), and Richard Shores living in Crooked Creek Township, Cumberland Co., IL in 1900 (born ca 1848 in OH).   I don't believe that he was related to C.C. or J.J. although Casey and neighboring Crooked Creek Township were small communities so they probably knew each other. The 149th IN regiment did not participate in the above battles either, so I suspect these old veterans were simply enjoying each others' company on a road trip.
Posted by Kimberly Nagy at 10/17/2011 09:00:00 AM