I am starting a new series of posts based on letters written home by my great-uncle Henry Steinbrecher.

Henry was born in Donnhof Russia on 10 September 1890, the first son of John William and Eva Elizabeth (Hettinger) Steinbrecher.  Henry had 4 older half-siblings from his father's first marriage to Catherine Baus.  The Steinbrechers emigrated to the U.S. in 1892 and eventually settled in Fulton County, OH.


Henry registered for the draft in June 1917 and enlisted in the Army on October 12, 1917.  He was initially sent to Camp Sherman near Chillicothe, OH for training.  He wrote several letters home to his parents.  They are addressed to his younger brother Arthur.  These letters were passed along by Arthur's widow Lola to my mother Ruth and then to me. 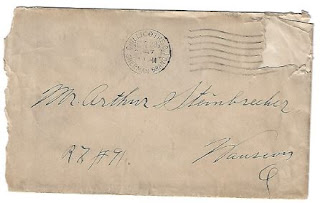 We believe that the reason they were addressed to Arthur is because Henry's parents could not read or write in English.  They were part of the Germans from Russia ethnic group - a people who lived in Russia for over 100 years but maintained their German language and culture.  Once they came to the U.S., they continued to speak primarily German.  Of course, it was probably frowned upon for Henry to write in German, so he wrote in English to his brother.  Most letters carry the salutation "Dear Parents". 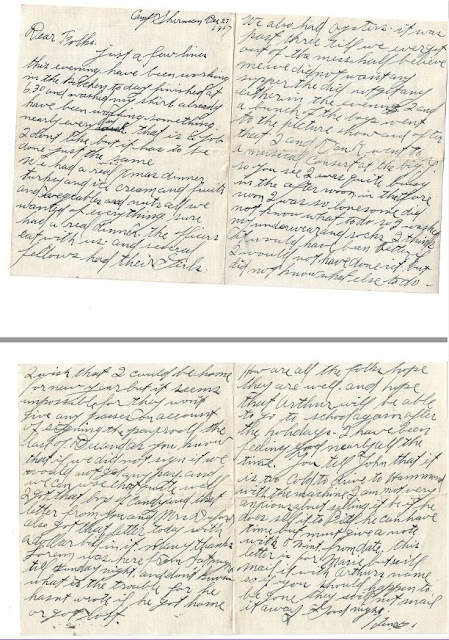 The text of this letter says:


Camp Sherman Dec 27 1917
Dear Folks,
Just a few lines this evening, have been working in the kitchen today finished at 6.30 and washed my shirt already have been washing something nearly every day. That is a job I don’t like but it has to be done just the same.
We had a real Xmas dinner turkey and ice cream and fruits and vegetables and nuts all we wanted of everything. Sure had a real dinner. The officers eat with us. And several fellows had their Girls. We also had oysters. It was past three till we ever got out of the mess hall believe me we did not want any supper the did not get any either in the evening I and a bunch of the boys went to the picture show and after that I and Dan K went to a musical consert at the big Y. So you see I was quite busy in the afternoon in the forenoon I was so lonesome did not know what to do so I washed my underwear and socks. I think it would have been better if I would not have done it but did not know what else to do.
I wish that I could be home for new year but it seems impossible for they won’t give any passes on account of signing the payroll the last of December you know that if we did not sign it we would not get any pay and we can use the quite well. I got that box of candy and that letter from you and Mrs. Duford, also got that letter today with a dollar bill in it. Many thanks. Lorenz was here from Saturday till Sunday night, and don’t know what is the trouble for he hasn’t wrote if he got home or got lost.
How are all the folks hope they are well. And hope that Arthur will be able to go to school again, after the holidays. I have been feeling good nearly all the time. You tell John that it is too cold to drive to Hammond with the machine I am not very anxious about selling it be if he does sell it to Bill he can have time but must give a not with 5% int. from date. This letter is for Marie but will mail it with Arthurs name so if you should happen to be gone they will not mail it away. Good night, Henry